I've a fear that this blog post is going to come out achingly white. Y'see, we need to talk about hip-hop. But the problem is I know feck all about hip-hop. There's probably a cassette of a Public Enemy LP somewhere in my house in Belfast, but if you need to talk to someone from Belfast about hip-hop, it should really be Hippopotamus Rex. That's my friend Ronan Hamill. He knows so much about hip-hop and rap they gave him a show on PBS radio in Australia, but he's abandonded social media, and you won't get an answer if you write to him so you'll have to listen to me for the time being. I just hope this doesn't come out sounding like Ali G took over Ivied Feet for the morning...

I'm absolutely buzzing this morning, off a musical high after going to see Los Petit Fellas and Crew Peligrosos in the Latino Power venue in Chapinero last night. These are two bands who reject the "blunts, bitches and bullets" approach to rap, and given Medellin's recent history of urban violence, it's a strikingly inspirational posture for a group like Crew Peligrosos. They were in Bogotá launching their new album, Medayork, which was produced by Toy Selectah from Mexico's Control Machete. The video for the single "Medayork" is a tour through their neighbourhood of Aranjuez in Medellin, where they're known for their close links with the local community, and where, according to one friend, thanks to their influence the local kids now grow up wanting to be B-boys, instead of motorcycle assassins for the drug lords:


That's enough of the cold-headed analysis. They absolutely tore the place apart. The video is quite laid back compared to the live show. I'd been told by friends that their "flow" is something else, and so it is. Blowing through Bogotá like a Paisa whirlwind, they had the 150-strong adoring audience going wild for them.The degree of intricacy with which the two rappers delivered their intertwined lines left me astonished. (How much time do you have to spend rehearsing to get to be that tight?) Incredibly, I managed to leave the gig without buying a copy of the album from the bloke who brandished it in my face on my way out, but it is available on the fabulous Polen Records, and I suggest you try to get your local shop to get it in for you. 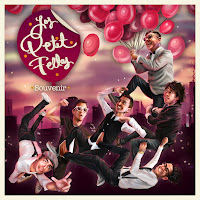 The support act were Los Petit Fellas. These guys have been on the go in various forms since 2006 and I'd been listening to their music this week after I heard they were going to be playing, but they caught me totally by surprise by being a whole lot meaner and a whole lot heavier than I expected. They have an eclectic musical base, there's funk and soul and rock and blues mixed up in there, but the singer raps and it all comes out as an incredibly hig energy hip-hop with brilliant tunes (and when was the last time you saw a 6 piece hip-hop band playing with a baritone saxophone?) Flawless rapping, great songs, brilliant musicianship, this group are a bunch I would travel to see again anytime. The good thing about their website is that if you sign up for their mailing list you can download their 5 track EP "Souvenir". Go on, it won't cost you anything and it'll guarantee you a supply of Colombian Spanish emails that you won't understand and can bin with a clean conscience.

If you like the music here, please give this post a mention, a repost, a share, so the bands can get a bit further afield. If you are going to play their music on the radio (Clint Iguana), please mention their websites. There's so much great Colombian music here, the rest of you really need to start listening to it!

(How did I do talking about rap?)