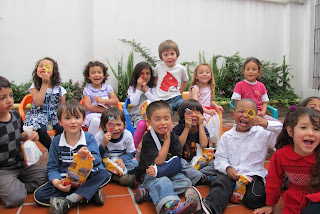 I think there’s an outside chance we might have distinguished ourselves for being atypically relaxed parents. So unhurried, in fact, that we haven’t signed the child up for the conservatoire, nor enrolled him in a footballing academy, nor hired a private art tutor. We’ve been too busy playing with him and having fun to worry about all the proper stuff that your real middle class parents busy themselves with. This has its upside – we have a great laugh. It has its downside as well, as, for example, when we went to his school and asked for a slot to organise a little birthday party for him with his classmates. The other parents, knowing the routine, had booked their slots at the start of term. Hippy mum and hippy dad found out to their cost that you can’t just leave it to the fortnight before the big day and assume that the nursery is going to have a space to give up for your little treasure’s moment of glory. Hence Oisin got two birthday parties… (we’re back on the upside again!). Once on the day of his birthday with us at home (I'll not go into the details of daddy arriving off the plane from Medellin hungover for the breakfast birthday party), and once this morning, 12 days late. I suppose it’ll make a bigger impression on him, an entire fortnight of celebrations, and we’ll be the winners in the long run… until this time next year when he’ll insist on following the same protocol I imagine, unresponsive to our pleas that the two week extended party was due to a scheduling cock up on our part.


Here’s a few photos of the event. The nursery has the routine down to a T – the music teacher comes and sings them a few songs, they dance themselves silly, they eat the cake you’ve brought a few minutes earlier, they all get a present, the birthday boy or girl gets lots of big presents, and then someone has a cry because it’s all been too much (Oisin in this case, but that’s our fault for sparing the rod all these years).

(For those who don’t know, the blog title is a reference to an album by the excellent Didjits. Here’s a video of the album cover. Apparently The Offspring did a cover of this song. I’ve never heard of the Offspring. I recommend you don’t either and concentrate on the Didjits.)