If I was to put it in a cliché, there's never a dull moment in Colombia. What this means in more prosaic terms is that you rarely get a moment's peace and quiet in a restless, raucous city such as Bogotá with its eight million inhabitants. There's so much to notice here on a daily basis that yells out to be observed and recorded and shared, yet one consideration holds me in check a lot of the time. It is the suspicion that the things that catch my eye seem noteworthy to me perhaps more as a result of my own ignorance of local conventions, and that by commenting on them I essentially run the risk of ignorantly poking fun at Johnny Foreigner (a historically popular pastime for the inhabitants of the United Kingdom). Which is already a daft way of looking at things, because you can hardly categorise Colombians in Colombia as foreigners. So if I were to comment on these eye-catching moments it would be more like Johnny Gringo showing up his own idiocy by scoffing at the locals.

There are though some aspects of Colombian daily life which transcend such potentially high-minded concerns and warrant holding up to the cold scrutiny of international opinion. (Perhaps I should at least specify Bogotá daily life, for with a population of over 40 million, stretching from indigenous tribes through Afro-colombians descended from imported slaves, to the deluded criollo class that is now one with the mestizos, living in the second most bio-diverse country in the world, Colombia is a lot more than just Bogotá.) One such detail that has had me perplexed on a regular basis as I make my short bus trips in and out to the office where I now work is The Slide. 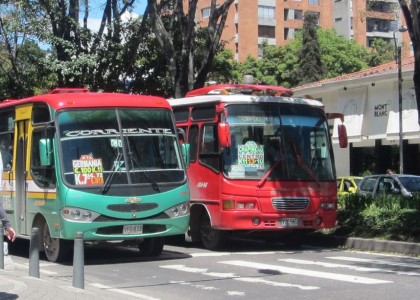 Bogotá buses are a world of their own, and a difficult one to come to terms with as a foreigner here. Not least because they employ a system of signage that militates against actually being able to comprehend the bus's destination as it hurtles towards you at a speed that is usually in inverse proportion to the vehicle's roadworthiness (the signs cram an assortment of names onto a small sheet of painted plywood which hangs in the front window, names which aren't – obviously – listed in any sort of geographical order which might belie a sense of the bus's actual route). Nor because they are tiny, and I regular clamber onboard only to bang my head against the roof, set at a modest five feet above the floor (I tend to spend the trips with my chin pressed firmly against my chest). No, there's a lot of things I still don't or can't get about Bogotá buses, but the past few weeks have seen many Slides, and I am struggling to make sense of them.

The scene is thus: a passenger arises from their seat in order to elbow their way through the swaying scrum blocking the path to the back (exit) door of the bus. The lucky person standing closest to the newly vacated seat squeezes past the other seated passengers, takes up a position facing forward standing directly in front of the empty seat, bends their knees slightly, and then leans back and places the small of their back firmly against the top of the seat back. They then hold this Pilates-like position for a good number of seconds before gently relaxing the backwards pressure from their knees, hence allowing themselves to slowly slide down onto the unoccupied seat. The first time I saw this happen, it was on the back row of seats on a bus and I was the passenger on the left of the slider. I thought that it was a diplomatic way of unobtrusively lowering oneself into the seat whilst repelling the buttock overspill from adjacent travellers, and as such took it as a sign of good manners.

Subsequently, I noticed the slide happening on single seats on less crowded buses, and now my curiosity was piqued. What on earth could be the motive for this strikingly ritualised and inefficient method of sitting down? There was only one place to look for the answer – my nearest and dearest Colombian.

“They don't want to sit down on the seat while it is still warm from the previous passenger. They are giving it time to cool before they slide down onto it.”

Gobsmacked once again by Colombia everyday life, I marvel at what seems important here. What on earth could be the matter with sitting on a bus seat that has a mere memory of the warmth of the
previous arse? What is the risk here people? Is there something bacterial hiding in the warmth that can penetrate the thin fabric of Colombia fashionwear and deliver a potential threat to the unsuspecting bum? In a country so in thrall to the Catholic Church that it makes 1950s Ireland look like Christiania, I'm sure there's a good number of people who think that homosexualityness can be spread by sitting on warm bus seats. The economy of fear regulates once more, fear of the next person, fear of proximity, fear of bodies, fear of a warm bus seat. The slide has gone from being a token of consideration to a sign of ignorance in my eyes, and I offer it up to you as exhibit number one for the case that Colombians are bonkers.