Saturday is cleaning day in the house, and usually about an hour after breakfast I'm asking myself "where does all this frigging dust come from?" When I worked at the Sherman theatre, I regularly swept and mopped the main stage, which was something in the region of 150 square metres. Our flat's floor area is 142 square metres, according to the council tax bill, and despite considerable portions of it being hidden underneath large pieces of furniture, it still takes me hours to get round with the brush and mop. Bring back main stage, that's the thought in my head as I inch my way round the nooks and crannies of our "penthouse".

We take turns, each week, to clean a different part of the flat, but one of the intriguing features of this arrangement is that no matter which bit uncle tio Fernando gets to clean, he regularly finishes about an hour and half before either Pati or me. Today I think I discovered the reason why - he gets help.

The day was later rescued from domestic enslavement by a trip to the city centre to see the opening parade of the Bogota Theatre Festival. The theatre festival hired a shaman to keep the rain away, something that the organisers of last year's under-20s football world cup, held in Colombia, did for the final. (This, as you can imagine, meets with a certain degree of derision from the press.) The local RCN TV news channel reported on the shaman's efforts on behalf of the theatre festival here (report in Spanish, obviously).

I don't know if you can get your money back from a shaman if he's signed a contract, but by the time we got to the city centre it was absolutely pouring down. The street hawkers are faster on their feet that the rest of us - vendors suddenly appeared selling umbrellas and waterproof ponchos (cost: approximately 60 pence sterling. Once the rain came on the price went up to 90 pence). The waterproof poncho isn't a good look: 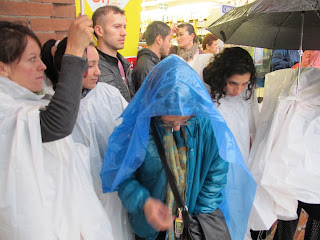 Once we got to the Plaza de Bolivar, it started to ease off, and finally by the time the parade had passed and the concert was warming up, the rain came to a stop (perhaps the shaman only received part payment?). There was a 20 piece orchestra playing the music of the legendary Colombian composer Lucho Bermudez. If you don't think 1950s Colombian big band music can be sexy, I defy you to click this link and not find your hips moving...

As the evening was only improving, we bought a half bottle of aguardiente from a passing seller (to hell with the "responsible parenting" look - child on my shoulders, swigging from a bottle of spirits in the main square in Bogota) and danced to the music. Then the north Colombian singer Toto la Momposina came onstage to sing a final few songs with the orchestra. This woman might be 64 years old, but she knows how to set an audience on fire!

As if to underscore that things couldn't get any better, we found an empty taxi at the first attempt, the eastern ring road wasn't blocked by landslides, and we got home in one piece. A satisfactory conclusion to a day that began, mop in hand, so inauspiciously.
Posted by Col_Buendia at 10:16