Our tuk-tuk driver, Niel, turned out to be the kindest, most softly spoken person we’d bumped into in ages. This was despite the fact that we got off to a poor start. I approached him, recognising the name of the guest house I’d booked on the laminate that he held as we stepped out into the Cambodian rains. He smiled, and refused to take us as we weren’t of the surname written on his sign. Our language skills did not overlap to the degree that permitted jointly contemplating the notion that the guest house had forgotten to wipe the name of the previous pick-up off his laminate. 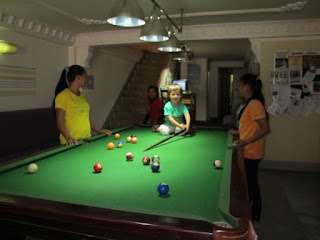 We passed an awkward, silent couple of minutes waiting to see if someone else on our flight had the surname password to get onboard Niel’s tuk-tuk while the other drivers progressively moved off with their various human cargoes. Once it became clear that there wasn’t anyone else left to take into Siem Reap, we laughed, gave up on our reluctant standoff, and were installed in his taxi. To Rosy GuestHouse. How could we resist the charms of a guest house called Rosy? “G”, the French chef/administrator, met us at the door and got straight down to business with an introduction to what lay ahead in the temple complex of Angkor Wat. We negotiated a day rate with Niel, and if there was a hustle here we couldn’t see it – he quoted what the hotel said would be the rate for a day’s driving and waiting around the enormous site, and his gentle nature deterred me from the formulaic haggling so beloved of wealthy backpackers. After a half-hearted wander round the centre of Siem Reap, with our hearts sinking at the idea that the town possesses a thoroughfare called “Pub Street”, we retired to our Rosy room, to the utter luxury of brilliant, crisp white sheets, more pillows than we could use, a flat screen television and a borrowed DVD of Spirited Away. Oisin was obsessed with the pool table in the bar, and the staff even treated him to his first ever pool lesson – plonked on top of the (already battered) table itself, pushing balls into the pockets with his hands, roaring with delight.

The next morning Niel was already waiting in the tuk-tuk across the road when we emerged for breakfast. Feeling slightly cornered I made a shy wave and disappeared off the balcony in search of eggs. And so, after breakfast, we were off to Angkor Wat. There is very little I can sensibly say about the place: I think it would be more honest to admit defeat and accept that it defies my limited powers of description. I think I’ve said before (Taj Mahal) that I’m sceptical when it comes to these “wonder of the world” places, the must-see, must-do boxes that have to be ticked in order to adequately impress one’s fellow workers on return from a suitably exotic holiday. But Angkor Wat rewarded our hesitant enthusiasm with an unanticipated experience that far surpassed our expectations, informed only by endless travel agent poster reproductions of stone faces. On top of that I got to wander round for two whole days play-acting Indiana Jones (hoping to bump into Lara Croft).

If I resign my literary skills in the face of a subject like Angkor Wat, I will at least offer up a small taste of how it taxed my limited photographic skills. From the crumbling stones temples frozen in the rooty grasp of the aptly named “strangler fig” trees and the endless gloomy corridors whose dank dark corners still carry the whiff of incense past to leaping “apsaras” (dancers) and immense, impassive carved faces, the complex drove Pati wild with frustration as I spent hours playing around with the settings on our little camera trying to capture that elusive defining image of the place. By lunchtime on the second day she’d had enough and spent the afternoon attempting an impromptu siesta in the back of Niel’s tuk-tuk while he chatted to the other drivers as Oisin and I explored the latest stop on our grand tour. Angkor Wat has, though, provided me with what I think is the photograph that I am most proud of so far on this journey, so any comments will be gratefully received. 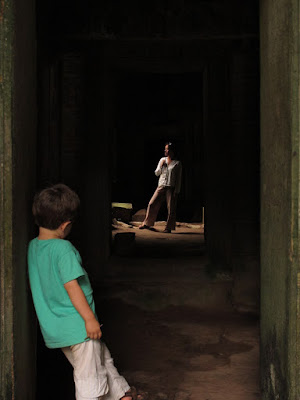 Day three in Siem Reap was spent away from the temples. In a stab at being sensible parents and defusing any cabin fever before it crept up on us, Pati headed off for a boat tour of the floating villages on Tonle Sap lake, while Oisin and I walked to the local shopping centre, bought a rubber ring, and hit the pool in the hotel next door to Rosy. Sadly the rubber ring didn’t survive more than forty-five minutes of Oisin’s road-testing, neatly justifying my earlier refusal to spend more than a couple of dollars on it, despite earnest entreaties for the purchase of the floating Mickey Mouse palace with built-in mini (milk) bar. And it would never have fitted into our backpacks anyway. When we’re stuck for an argument to explain to the child why we won’t buy whatever the latest plea is for, “but it won’t fit into our luggage darling” usually ends up being trotted out. So far he hasn’t come back at us with a counter-suggestion that we should get bigger backpacks, but it’s only a matter of time…
Posted by Col_Buendia at 20:25