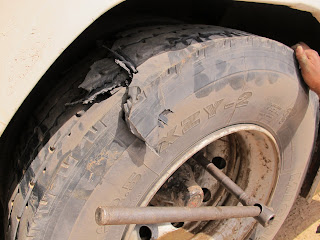 From Siem Reap we took a bus south to Phnom Penh. An early start saw us stuff our backpacks and jump in the mini-bus that was doing the rounds of the hotels to hoover up the tourists with tickets for that morning’s bus. Needless to say, the big bus duly broke down. This one was quite exciting, for it was preceded by a pretty dramatic bump, and then a loud bang. The engineers amongst the passengers swiftly concluded that we’d suffered a blow-out, and the gash in the bus tyre was really quite spectacular. Getting off to stretch my legs, the thing that hit me was first the heat, then the fact that we were surrounded by water.

I’ve realised that I don’t feel secure in countries and cultures that live without a firm demarcation between water and dry land. This bus was supposed to be driving us down the side of Tonle Sap lake in Cambodia. I’d look out one side of the bus and see the lake, with water stretching to the horizon. Then I’d look out the other side of the bus, to the land, and see flooded paddy fields, with water all the way to the horizon. Surrounded by water: where does the lake end and where do the paddy fields start? In fact, where on earth is Cambodia (or Laos, or Thailand for that matter) if most of the country is under water? Did they just draw a line through the Gulf of Thailand and say “we’ll be this bit of land”, while the neighbours, suffering from some sort of emperor’s new border syndrome, were too embarrassed to point out that it was largely sea floor or lake bed they were claiming as sovereign territory. At times the entire country resembles one big muddy paddling pool. It makes me jumpy. Where do you run to for safe ground when the water stretches to the horizon? On land, the houses are built on stilts, and on water there are entire villages that live afloat, small dwellings lashed onto large rafts that gently rock on the swell that the tourist boat trips leave behind. People don’t go fishing with a rod and line, they just wade into the front garden with a big net in their hand and hope for the best. And who on earth in their right mind builds a road down the middle of a lake the size of Wales? 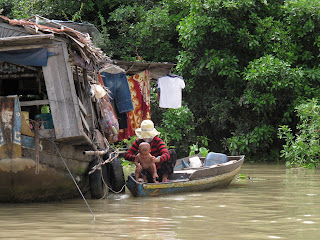 I can’t put my finger on the reason why, but on one level this waterland unsettles me. Perhaps I am a brutally unsubtle simpleton, who needs things to be self-evidently what they are with no question marks attached nor porous borders (oh how we hate porous borders in the UK). My confident sure-footedness started to drain away as we descended into Bangkok airport for the first time. The countryside that we had flown over revealed itself as mostly reflective: the sky, grey and heavy with yet more monsoon rains, bounced back up at us from the silvery watery surface of “the land”. And the water was divided up. Someone has cut up the water. That would be the sort of suggestion I would expect from a three year old. Yet semi-submerged hedgerows, trees and ditches struggle for air above the flood waters and presumably mark out what were once agricultural plots. Rice farmers work up to their waist in water, yet have to bend double to plant their crop, their noses hovering inches away from the rippling waters 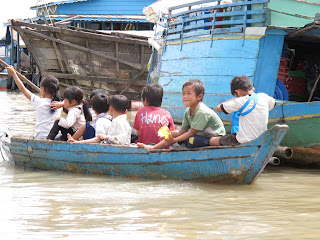 Perhaps it is not knowing what is under the surface that prompts my nervousness. Not that I’ve had to tiptoe through rice paddies, with their hidden and deadly water snakes, but I stupidly tried my luck crossing a large muddy puddle at the entrance to a Buddhist monastery in Vientiane, and sank up to my ankles in it: my sandals stank for several days thanks to the rank waters. Or perhaps it is the smell of damp that has accompanied us in most hotel bedrooms for the past month. How do you dry your clothes out when it doesn’t stop raining? We’re paying for shelter, yet there is no escape from the rain.

Sometimes it feels like being back at home – or in Corkadoragha.