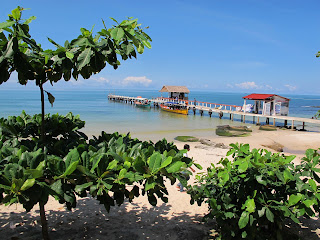 From Phnom Penh, with Silver safely back with his family, we headed further south to the coast. Sihanoukville, one of Cambodia’s leading tourist destinations, sits on the Gulf of Thailand and is blessed with a number of pretty beaches. We had originally thought about heading offshore to the island resorts that have recently opened up there, but lack of availability and our lack of confidence about what exactly awaited us in terms of childrens parks in the middle of an eco-reserve meant we took the safe option of the beachside hotel.

By the standards of our recent experiences of beaches, this one, “Serendipity Beach”, seemed pretty quiet, although it was still tricked out in all the familiar beach paraphernalia. Young kids who should have been in school endlessly trawled up and down the sands looking to sell cheap replica sunglasses. Cambodian women carried pots of burning embers balanced across their shoulders on a sort of yoke, with a plate of fresh shrimps on the other end – stop them and they cook the shrimps for you on the spot. Other women wander the ranks of sun loungers, offering massages, hair removal, pedicures – these ones had the worst marketing ploy I’ve ever encountered. “Look at the state of your feet, ugh!” they would yell as they stopped in horror at the end of my lounger. I’ll admit that I might not have the prettiest toes in the history of cute feet, but public ridicule of them is not likely to endear me to the idea of parting with a couple of dollars for beautification purposes. 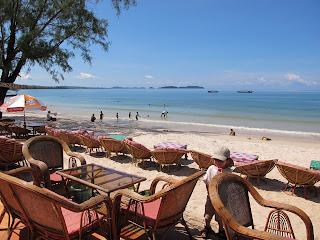 Day one on the beach revealed it to be not quite as tranquil as first glance had suggested. Jet skis roared up and down the shore, coming remarkably close to where swimmers played. Banana boats were being towed around with hooting westerners hanging off them. Apprentice windsurfers limped along the edge of the coast, teetering somewhere between sport and ridicule. And in the middle of it all there was an inflatable pyramid. Oisin insisted on getting straight into the water, and the pyramid turned out to be a huge slide. The coast seemed to have a very shallow drop off, for we walked out quite a distance with the water only just rising up over my waist. Sadly this fact failed to register with me in any meaningful way as we scaled the inflatable slide together in a marvellous moment of father-son bonding. Once at the top, the child refused to descend the slide in the prescribed manner, so I clutched him to me and threw the both of us off it. There is probably a simple equation that would tell you the minimum depth of water needed to absorb the impact of a father and son combination sliding down a 3 metre inflatable. Having failed to make this calculation in advance, my unplanned experiment revealed that this particular stretch of Cambodian coastline did not possess the requisite depth. We shot straight through the water and my coccyx ricocheted off the sandy bottom at considerable speed. Oisin partly surfaced, screaming for air as he was half drowned already, but as I couldn’t stand upright for the pain searing through my bum, I was flailing around in 3 feet of water myself with not much success at acquiring oxygen. The gravity of these life-threatening moments is rarely appreciated, in my experience, by the inevitable audience of doubled-up locals: their faces displayed a mix of astonishment at my unfamiliarity with the laws of gravity, and hilarity at the noise of the consequences. 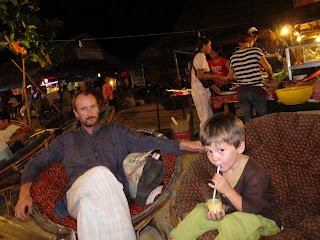 It took quite a while for me to regain full use of my backside – days, rather than hours. This was problematic, for there was not much else to do in Sihanoukville except lay yourself out on a sun lounger. We also perfected this goal on day one, with the predictable results that we were sorely burnt by late afternoon. In fairness, it probably had as much to do with the anti-malarials that we were still taking, for heightened sensitivity to the sun is one of the side effects. There’s only one thing to do when you’re on a three month long course of antibiotics and you’re suffering from mild burns – drink. All of the beachside restaurant-shacks offered a bewildering array of cocktails at silly prices. After a huge feed of freshly caught fish and some of the best chips we’d had since leaving Cardiff, as well as an indeterminate number of cocktails that were not incompatible with the notion of responsible parenting, we headed for the hotel. It was then that the last of the beach’s downsides revealed itself to us: the cheap cocktails were aimed at the backpacker crowd, and after dark huge sound systems were cranked up to get the party going. We lay in our bed, all aching arse and scorched skin, and wondered if this was the kind of crap techno music that you’d hear in the waiting room of the admissions office of Hell.
Posted by Col_Buendia at 18:04