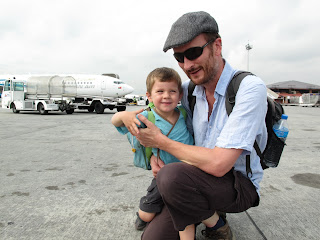 The security personnel in Delhi airport seemed determined both to help us miss our connection and leave us with a totally contrary last memory of their country – surly, unfriendly and rude. They were the distillation of everything we hadn’t experienced with Indian people during our month there, but after a fortnight in Nepal our flight changed in Delhi before heading for Bangkok, and the “direct transfer” was proving to be anything but. Getting off the plane, we found ourselves in the very same arrival hall that we had walked through with such trepidation just six weeks earlier. We were waved casually to the back of a decent queue. We had spent over a week in Nepal before we realised that it was 15 minutes ahead of Indian time (fifteen minutes! Who divides the world up into such bitty little pieces?). Where we thought we were making good time for our dinner date in Pokhara with Jazminda and her mum and dad, we actually must have been closer to half an hour late by their watches. So by the time we got back to Delhi, we weren’t really sure what time of the day it was. And with by now familiar Indian bureaucratic inefficiency, the queue was moving at a snail’s pace.

When we got to the top of the queue the guy behind the desk looked at our boarding passes, snorted that we shouldn’t even have been in it, and ushered us on through to security. At the entrance to the metal detector a semi-comatose Indian guard looked at our boarding passes and mumble needed mumble DT mumble desk over there mumble mumble back here mumble top of the queue mumble. Airports don’t relax me. Being late for flights definitely doesn’t relax me. But not knowing what time it is in an airport where your plane is leaving shortly and the staff don’t seem to have mastered the basic motor skills necessary for intelligible enunciation starts to stress me out just a little bit. I left the other two waiting at the top of the queue and headed for the indicated desk. Trouble was clearly brewing as the Brits gathered around the desk weren’t in a polite line and were muttering darkly. The various staff behind the counter were all engaged in pressing activities, none of which seemed to involve looking any of us in the eye, taking our boarding passes or telling us where we were supposed to be. The passengers were talking to each other in that way that only shared near-death experiences bring British people to actually talk to each other. And there was that faint whiff in the air, frustration mixed with a drop of post-colonial condescension, ‘ah look, the natives still haven’t managed to work out how to do it properly by themselves’.

When I finally managed to press our boarding passes into the hand of one of the people behind the desk, she glanced at them, scrawled “DT” on each in turn, and handed them back to me. The farce encroached on textbook absurdity – we would have had a much more “direct transfer” if we hadn’t been directed away from the departure lounge to queue at a desk to have the letters “DT” handwritten onto our boarding passes.

Having endured the absurdist airline prologue, the Indian security staff took over the main duties of the serious drama. Unsmiling, pointing, shouting when pointing didn’t achieve anything for them, they were everything that every Indian we’d met in the previous month hadn’t been. You know polite relations have broken down when you are swallowing your bile and trying to not address a boorish armed and uniformed security guard in his own airport in the same terms as you speak to your 3 year old son: “what’s the magic word?” Their sucker punch came when the male guard demanded my boarding pass. It was in Pati’s hand, and she and Oisin were inside the curtained space for women to be patted down. My guard seemed to be gearing up to have me ejected from the airport for want of a boarding pass, despite me repeating “my wife has it, she’s in there” and pointing at the modesty closet. At the same time, Pati was being sternly warned not to touch the curtain, as she sought to hand back my boarding pass after overhearing my predicament with the guard. Stalemate.

We nearly did miss the flight. You’re definitely late when the flight supervisor meets you halfway down the departure lounge and greets you by name. It was a shame to leave India with a parting sense of being glad to escape Delhi airport, but the irritation soon gave way to astonishment as we settled down on the Jet Airways flight to watch the stewards hand out endless quantities of canned beer before lunch was even served. I can’t remember the last time I was on an aircraft where complimentary booze was distributed. Sadly, the last few tattered shreds of a sense of parental responsibility meant that I was in no position to take advantage of this situation, but we were starting to feel that things were going to be a little bit different in Bangkok.