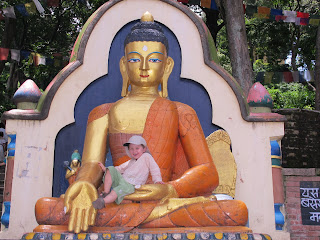 It was our last full day in Kathmandu, and we bumped into Tony at breakfast. He’d heard us speaking Spanish, most likely reprimanding the recalcitrant child, and mooched over to introduce himself. From Barcelona, he’d arrived in Nepal that week and was waiting to see the owner of the restaurant we were in – a friend of a friend and someone who was going to be able to provide him with work. At 42, in Kathmandu with not much more than his acoustic guitar and songbook, and looking for a troubadour’s position, he was arguably in a worse mid-life crisis situation that I am. Without drawing breath, his story unfolded to confirm our preconceptions. He’d just split up from his partner, with whom he’d spent years renovating a historic country house in Catalunya and turning it into a boutique retreat. He’d travelled to Nepal with marijuana in his luggage, and once that had run out, had nearly been busted by the Nepali police when they stopped him with a local who had guided him to a nearby holy man who supported his own spiritual meditations by supplying weed to adequately introduced westerners. He shared our disdain for Thamel and the backpacker scene, and we got to discussing the sex tourism side of things. The day before we’d passed an enormous billboard warning of the legal sanctions against those who visit Nepal to procure child prostitutes. Tony described having been offered sex by a school-age boy touting on the street. He then told us he’d landed an incredibly pretty Nepali girlfriend, but to his apparent abashment she was the same age as his (22 year old) daughter. The details were coming thick and fast and we’d hardly even had the chance to share our places of birth with him. Of course he would come and visit us when he got to South America, he had people to stay with all over the continent and it was only a matter of time before he was in Colombia. We said our farewells without Tony even noticing that we hadn’t swapped email addresses. 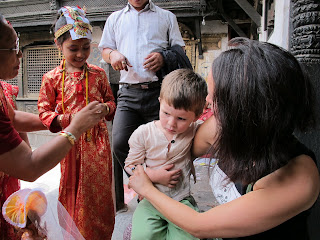 We walked away from Thamel and headed for Swayambhunath Temple. On the way we mistakenly stopped at Bijeshwori Temple, and found a Nepali family preparing for the wedding of their 12 year old daughter. Fortunately she was being married to one of the deities, in something resembling a first communion from what we could tell. The novelty of being photographed has now completed worn off for my son, and he can turn into quite an obnoxious little person if someone produces a camera in his company – myself included. Hence the chance to get a photograph with the little girl, in her Nepali finery, disappeared in an angry shout and the sight of him running out the door of the temple. We made our apologies and followed him out, shamefaced. 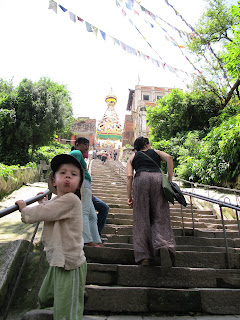 At Swayambhunath we faced some of the most insanely steep steps that I’ve ever encountered. And one of the largest troupes of monkeys that we’d ever seen. A stall holder warned us to put even the bottle of juice away out of sight, or risk having it snatched. We heeded her advice. We may have fallen victims to monkeys once, but never again, not even holy ones. On the way back down we met Tony. By this time, a mere five hours after our breakfast conversation, he’d acquired a large tattoo on one of his shoulders. A tribal design of uncertain origin, I was sure it did spell out one thing – mid-life crisis.

The next day we headed for the airport for our early morning flight to Bangkok via Delhi. Rushing through the airport, I made the mistake of going through security on the presumption that there’d be a currency exchange in the departures lounge, that not being an unreasonable place to assume that departing travellers might want to exchange their last handful of rupees. But no, no exchange facilities were to be found, and I now find myself the proud owner of over twenty quid’s worth of a closed currency that no one in the rest of the world deals in. If anyone is travelling to Nepal in the near future and wants a few Nepali rupees in cash to get a head start on the rickshaw drivers, get in touch. 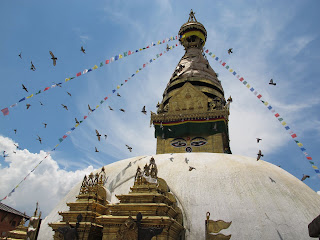