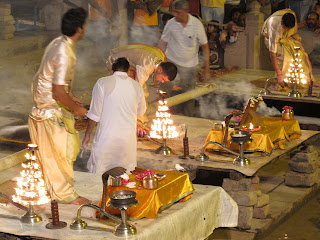 Some doors are closed to me. Others I choose not to open. In the case of the cremation ghat, it was a simple question of not wanting to see it. Early that day I decided that it could be interesting for Pati and me to have differing experiences of the same place. Hence she went off with Oisin to see the Kashi Vishwanath (Golden Temple) not far from our hotel in Varanasi, while I waited outside with the bag full of stuff that she wasn’t allowed to bring in for security reasons. Hindus walk past their temples like South American football players entering the field of play – the thumb of a clenched fist is touched to the forehead, and then moved across the chest in what seems uncannily like the way Roman Catholics cross themselves. I decided to take chai while I was waiting for my pilgrims to return, and the chai-stall opposite the temple served me a delicious thimbleful of tea in a small ceramic cone. When I tried to return it to the tea-seller, he got a little agitated as I set it down on his counter, and indicated that it was to go in the bin. I know we Westerners enjoy a throwaway culture, but surely an embryonic flowerpot is too much to be chucking out after a single cup of tea that cost me about 15 pence? Then it struck me that a “disposable” cardboard cup would probably cost much more to source or produce here than a tiny little ceramic pot, so in the bin it went. There are curious attitudes to waste, ones that I can’t quite get straight. In Agra, the week before, we’d driven past a series of road signs declaring “Say No To Polythene”. As a general principle this is largely sound. But surely there is a more pressing issue of priorities? Without wanting to restate the blindingly obvious, wouldn’t saying no to public defecation be a more pressing concern than plastic bags? Mind you, at least in a year or so you’ll be fertilising your tomatoes with this morning’s movements – not something you can say about polythene.

Some doors open to me involuntarily: despite walking the streets with my little nuclear family, I still get offered drugs. In the middle of the day. The tiny part of me that imagines itself to be a respectable middle-aged man travelling the world with his morally spotless family is outraged that the company of a small child is not enough to discourage seedy blokes from sidling up to me to ask if I’d like something to smoke. A much larger part of me indulges in foolish self-congratulation, along the lines of “well, at least you don’t look like you’ve completely retired from bohemia, take it as a compliment”. I struggle to think if there has been a single country in which I’ve set foot where I’ve not been offered drugs at some point. Maybe I do need a Nancy Reagan t-shirt after all.

I got mugged by a masseur on the banks of the Ganges. We’d been watching the waters flow quickly by, and reflecting (once again) that we’re here at the “wrong” time of the year, as there are no boat trips due to the height of the river. A guru had explained this to us, as he tried to soft-sell an hour’s meditation class. Once we’d declined the invitation several times, we seamlessly moved on to discuss India’s energy requirements and the opportunities for hydro-electricity. Despite the orange robes and prayer beads, this bearded sage started to succumb to great giggles as he told us how India had dammed one of the tributaries of the Indus that flows into Pakistan, hence depriving their neighbours of a part of their traditional water supply. He drifted off, and the masseur appeared before me, hand outstretched. For a second a flash of familiarity swept over me as I instinctively put my hand out to Cardiff’s late “Mr Shaky Hands Man”. The masseur gladly seized it in both hands, and before I knew it, he was halfway up my arm in the process of some sort of introductory massage. I eventually gave in, and ended up prostrate on top of a wooden pallet, while he pushed and pulled and tried manfully to pummel me into shape. What I think he took as my innate resistance was me trying to make sure he didn’t crush my sunglasses in my breast pocket. As this spectacle was unfolding, Pati and Oisin were playing with some of the locals who work at the ghats selling trinkets to the tourists. One young woman had sold us a bamboo fan two nights previously, but tonight she was gently pestering Pati to buy a book of postcards of the city. She moved her head stiffly, and it became apparent that she had an enormous web of scar tissue running from both sides of her chin over her breastbone and all the way down below the neckline of her top. Pati got chatting with her about Oisin, and then asked her if she had any children of her own. She became melancholy before telling Pati that she had had three daughters, but that her husband had killed them before attacking her with acid. At this point, post-massage, I witlessly butted in, and this particular door swung closed. It wasn’t a conversation that was ever going to continue with me being present. We didn’t see her again as we left the next day, but we bought the postcards.