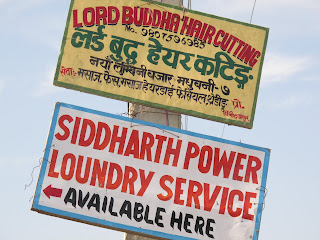 We leave Varanasi and head north for Nepal. The overnight train takes us to Gorakhpur, where the inevitable tout is waiting outside the first class carriage to hoover up whatever Nepal-bound gringos it spills out and to usher them swiftly onto his particular jalopy. We absorb his solicitations and walk on, more focussed on finding food for the child than catching the next bus out of town. I’m not sure I’ve ever had breakfast before where I’ve been entertained by mice running over the food preparation surfaces, but let’s assume that (a) as I’m writing this we all survived, and (b) Gorakhpur’s railway station cafes won’t be troubling the compiler of the Egon Ronay guides anytime soon.

We thought the persistence of the tout was worth at least a perfunctory enquiry in the corresponding office, so I went to ask for the price of a ticket to the Nepali border. The fat man behind the desk was delighted to show me to a seat, and began offering me all sorts of packages to the tourist hotspots of southern Nepal. When I told him I only wanted three tickets to the border he lost interest immediately and assured me no bus would be leaving for the next hour and a half. I left, we walked to the end of the street, hopped on the local bus, and were on our way ten minutes later.

At Sonauli a Nepali cycle rickshaw man gave us the slowest, most languid sales pitch we’d yet encountered. “Forty rupees full service.” We were beginning to like Nepal and we’d not even set foot in the place. I’d not expected to be offered a “full service” anywhere before Thailand, and despite not being exactly sure what it comprised, we clambered aboard his rickshaw. ”Full service”, it turned out, was taking us to each of the border posts in turn and waiting as we got stamped out of India, went to the sweet shop to change some sterling into both dollars and Nepali rupees, and then got stamped into Nepal. US dollars only for the Nepali visa on the border. The sweet shop man assured me that all three of us needed a visa, and so happily sold me $75 for three fees. The Nepali border guards put a sticker marked “Visa Fee US$25” in each of our adult passports, but the child got only a stamp, and it read “Visa Gratis”. Now it’s been a while since I studied Latin, but I’m fairly sure this means free visa, and so I’m equally sure that we thus got fleeced for the child’s $25 visa “fee”. I’ve explained this to the child, but I’m not sure that he’s grasped the fact I’m offsetting it against his pocket money for 2021.

By this time it was past midday, and our destination of choice, Pokhara, was still a solid 7 hours distant. We debated and decided to turn left instead, heading for Lumbini, a mere hour away. First impressions of Nepal were striking – all the people seem to have been left behind in India. The place was near desolate. On the road the taxi could travel entire car lengths without using the horn, and at times there was so much empty space all around us that the driver wasn’t sure which potholes to avoid. Once we got out of Bhairahawa (in 2 weeks we never learnt how to pronounce this place name) onto the road to Lumbini we started to fret that something was on and no one had told us about it. There was no one around. Maybe the civil war had kicked off again and the people had fled the country…

Lumbini is taken as the birthplace, around 486 BC, of Siddhartha Gautama, better known to the unenlightened as the Buddha. Once we gained the environs of this holiest of places in the Buddhist world, the commercial branding took a turn that transported me back to rainier days driving through Knock, Co. Mayo. Rivalling even the Lamb Of God B&B, or the Mary Magdalene Pedicure Salon in Ireland’s holiest town (I may have made that last one up), Lumbini boasts a Buddha Bhoomi Guest House, a "Lord Buddha Hair Cutting" salon, and a "Siddarth Power Loundry Service." The gardens around his birthplace are being turned into a quite elegant and peaceful park, but with their ample waterways they are exactly the sort of mosquito breeding grounds in tropical Nepal for which the practice nurse insisted we take anti-malarials.

There’s only one thing I really know about Nepal, that it’s the origin of the famed Gurkha soldiers. Hence there’s only one thing I can really think about as we drive across the Nepali lowlands – Joanna Lumley. It is not uncommon for British men of a certain age to spend undue amounts of time thinking about Joanna Lumley, so I distract myself by watching the other Western bloke on the tiny local bus out of Lumbini the next morning have a panic attack and insist that the assistant change his seat. There is a rudimentary grammar to the assistant’s communication with the driver. After a few minutes I decipher one bang on the door for “stop for passenger”, and two bangs on the door for “onwards, passenger aboard/alighted”. Repeated bangs seem to have a variety of meanings, mostly “get the finger out” while we are overtaking. I can’t work out why the assistant, hanging out the nearside door, should be advising the driver on his overtaking practices. I swivel round in my rear-facing seat and take a look out the front window. Or rather I don’t. The windscreen is so cracked and fractured that it is most likely the assistant has a better view of the oncoming traffic than the actual driver. Maybe that is why the other bloke was having his panic attack.