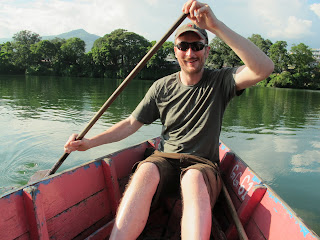 From the swampy lowlands of Lumbini, we had steadily climbed into the mountains, along switchback roads seemingly hand-chiselled out of the very sides of unforgiving mountains. This time of year, with its rains, means a much greater chance of mud and rock slides, and the convivial young bus owner, who seemed to be journeying with us in order to make sure his employees didn’t drive off with his major investment, enjoyed telling me how the week before they’d been held up for 6 hours while several tons of ex-mountainside was cleared off the road. Climbing further, we bumped our way through valleys that looked like they’ve been cleaved into the mountains with an enormous celestial axe. Rope bridges hung perilous and insouciant over the swirling waters churning below as I tried not to freeze every single frame of the mental footage I was previewing of our helpless plunge over the unprotected edge of the road and down the side of the ravine.

The touts in Pokhara were certainly insistent. I had extrapolated the fearsome reputation of the Nepali Gurkhas to the whole population, and had resolved not to look anyone in the eye for the duration of our stay in the country. The inclination to haggle forcefully with the locals at a market stall begins to wane when you notice that the shop next door has a huge military banner reading “Anyone who says they prefer death to living as a coward is either lying or a Gurkha”. Hence the touts unknowingly had a head-start on me, and the cheeky one who happily continued his patter in fluent Spanish with us as we adjusted our backpacks and looked for a taxi to the Pokhara hotel was particularly hard to shift. It wasn’t till he’d told me to sit in the back of the taxi with Pati and Oisin, as he’d be coming with us to “make sure we got to our hotel”, that the penny started to drop. The taxi-driver smiled disinterestedly when I asked if the guy was with him – he was understandably keeping working relations friendly with someone he sees every day, while we’d be gone the following week. It was up to me to deal with the tout. I told him to sling his hook. In English. 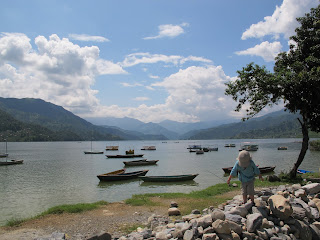 Pokhara is a little chunk of paradise. At 800m above sea level, it is cooler than the plains, but still sunny and warm. The peaks of the surrounding range of Himalayan mountains are coy at this time of year, and we only caught one glimpse of “Fishtail” mountain peeping through the monsoon season clouds. Nestling at the side of a lake, the town has become ’s primary outdoor pursuits centre, with agency after agency offering paragliding, white-water rafting, kayaking, canyoning, trekking, climbing and horse-riding, along with air-conditioned bus trips to the next destination for four times the price of a Nepali bus. God forbid a pampered Western gap-year student might share a bus with the locals. So Pokhara, or rather the backpacker enclave known as Lakeside, has become a self-centred little backpacker world where shop after shop offers the identikit “traveller uniform” of hemp trousers and tie-dyed baggy tops, soapstone jewellery dangling from leather strips, woven shoulder bags with meaningful designs – the sort of stuff you’d never catch a local wearing. There is enough of this gear in Pokhara to kit out the national AGM of People & Planet for at least a generation. To be fair, the backpacker business, as evidenced by the types of experiences available to purchase, has moved substantially up the income range, and I have a sneaking suspicion that these shops have been stuck with this stock of traveller uniforms for a good decade or more. One would die rather than be seen in the Pokhara Irish pub in anything less than a Berghaus microfleece these days. Perhaps the shop owners are holding out for a Levellers revival. 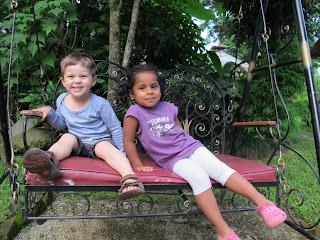 In the middle of all this we ran into Maya and Kushal, with the delightful Jazminda. She was 4, Oisin was besotted at first glance, and so they ended up playing together for as long as it took them to start punching each other in the face. Maya is a Guatemalan-born German woman who’d fallen in love with years ago, and who had now fallen in love with Kushal, an economics teacher and climbing instructor. They’d been married the week before, and were waiting for her mother to fly over from for the big Hindu wedding party. Maya kept pumping me for opinions on international relationships, but I couldn’t bring myself to tell her the awful truth. Perhaps a Nepali climbing instructor with Gurkha blood in his veins will be easier to live with than a sociologist from the Colombian Andes.