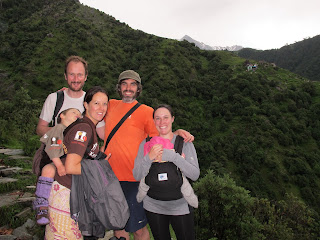 Leaving the ‘Kora’, the clockwise walk peppered with shrines and prayer wheels around the side of the mountain upon which the Dalai Lama’s residence is perched, we got talking to a delightful north American couple who were carrying their 5 month old daughter in the same make of baby carrier that we have. Despite my generic, ideological suspicion of most things American, we ended up having lunch together, and left with the expectation of bumping into each other again soon.

After a snooze we headed back out for the afternoon. We flopped down in the tea shop of an Indian woman who’d grown up in Leamington Spa, and Oisin played delightedly with her immaculately groomed cocker spaniel – about the first dog we’d seen that didn’t look like it was a walking collection of fleas held together by dog skin. Will and Maura appeared, with the enchanting Muiren in the baby carrier. They’d been making plans for us, and invited us to go hiking with them the next day up to Triund, the jumping off point for the big 5-day hikes across the Himalayan passes. They’d been up a few days earlier with their guest house owner as a guide, and had discovered that the route is easy to follow, and not the most challenging of walks. A date was made for 7.30am the next morning.

Our preparation was extensive and meticulous to an equal degree. We had run out of cash, and the next morning I found that the cash machines are still locked up behind their roller shutters at dawn. We had one 2litre bottle of water and half a bag of almonds. After much agonising about sweaty feet, we opted for the walking boots over the sandals, and leaving our Berghaus raincoats behind, we set off for the rendezvous. Late, obviously, we’re on latino time here.

A rickshaw to Bhagsu meant we were a mere quarter of an hour late. Will, Maura and Muiren appeared, with a single rucksack that bulged so much it already had me convinced that our half a bag of almonds would prove insufficient. Setting off, we picked our way between guest houses and terraces sown with corn, before we finally got to the start of the trail and began to climb. The going was steep, at times dizzyingly so, yet our little man tramped up and up, delighted with Will’s generous exclamations of admiration. Soon Bhagsu was reduced to a few tiny corrugated tin roofs visible below us, while in front of us the mountain continued to rise nearly perpendicularly.

During a short snack stop, white mist started rolling up the mountain behind us. By this point Will and Maura had confessed that they guide groups of students from the college where they teach in Tamil Nadu on treks in the local mountains. Any inclination I may have had to offer an ill-informed opinion about our situation withered in my throat. Will got us back on the track with a promise that not too far ahead there was a tea-shack where we could rest up and take stock of the changing weather. Those of us who had neglected to procure cash before climbing the mountain silently wondered just how embarrassing it was going to be to have to cadge a loan at 2,500m above sea level.

The rain caught us before we were anywhere near the shack. The few first drops came as a gentle warning, but without any further preamble it started to tip down in earnest. Will, it turned out, had brought not only two raincoats but two umbrellas as well. I started to wonder how much of my innate ineptitude I expose at first glance to complete strangers. Maura took an umbrella, as with the Muiren in the sling she couldn’t fit a raincoat on, I took the other, and Will and Pati had a jacket each. With Oisin in our sling on Pati’s back, the raincoat hardly fitted over her, so I tried to trot alongside as the umbrella wallah, with the predictable result that none of us received any protection from the rain at all. The path turned to a torrent, and I felt a fleeting moment of vindication when I realised my feet were still dry, as opposed to Will and Maura’s sandal-clad sogginess.

The rain just kept coming down heavier and heavier, to that point where everyone in the group falls silent wondering if they are the only one worried about the turn events are taking. We were past the point of trying to keep anything dry, and I had handed our camera over to Will to wrap up in the plastic bag he’d brought for just that purpose. Then we turned a corner on the ridge and in front of us on the other side of a small ravine was the tea-shack of lore. Magic View they call it. The proprietor was a friend of Will and Maura’s guest house owner, and recognised them from their previous ascent, so nothing seemed to be too much trouble for him. Endless cups of chai were sent in to us, while our delighted son cavorted semi-naked as we stripped his dripping clothes off to dry.

A group of Israelis were sharing the refuge with us, and I sat there like Basil Fawlty, trying not to mention the war. I’ve just finished reading John Pilger’s Freedom Next Time, and had been moved nearly to tears by some of the accounts he provides of the suffering of the Palestinians. When the Israelis discovered that Will and Maura were Americans, one replied “ah, we’re your best friends”. All prejudices confirmed and safely still in place then.

An hour and a half later, we had got to the point where Pati, eschewing her own sodden clothes, was dressed in the “Mountain Cleaner” t-shirts that the tea-shack owner sold, with one of his sheets from the floor of the refuge wrapped around her legs like a sarong. Oisin had another one of the t-shirts on, down to his knees, with an enormous pair of thick purple woollen socks up to his thighs, like some sort of Tibetan reject from an audition for The Kids From Fame. The photo will duly be produced for the first girlfriend he dares to bring home. Will had consulted with the tea-shack owner, and they’d decided that as the rain had held off for more than half an hour we should take our chances and head down.

There came a point that I didn’t notice, about halfway down, where the rainwater that had soaked my t-shirt was replaced by perspiration. It all felt the same, except that I was now warm. The conversation on the walk back turned to matters geo-political, and it was a new delight to find myself in conversation with two Americans who got as far as considering if it was shame they felt at the passport they had to carry in life. Now it was my prejudices that had to take a knock, and so on we went, discussing our governments’ various, unending, foreign policy imbecilities, as we slowly wound our way back down towards their guest house. Soaked to the skin I was, but buzzing with the delight you only get from unexpectedly sharing a worldview with other decent human beings. As well as a small sense of relief that we’d perhaps just got away with clambering over a mountain that could have turned out less forgiving.