The Blond Piper of McLeod Ganj 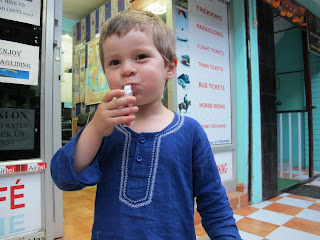 Even the Tibetan Buddhist monks have surrendered to the charm of the blond-haired child god of uncertain gender. Things were not helped by the fact that last week a woman outside a backpacker café in Delhi gave him a henna tattoo on the back of his right hand. Henna tattoos, I learnt about 3 days later from an amused Indian, are exclusively for women. (At his age I think Oisin is still struggling with the concept of gender, never mind subverting it.) I really don’t know what it is about my son that particularly pushes the Indians’ buttons, but they just can’t get enough of him. It started in earnest on the air-conditioned bus on which we spent most of last Thursday in Delhi hiding from the heat. They call it the “HoHo bus”, short for “Hop on, Hop off bus”. (I’m guessing they never ran the abbreviation past any north Americans, for I can only imagine the disappointment of a queue of Yank college brats upon discovering that the bus isn’t a love service crammed with scantily-clad Indian women.) First it was playing with the daughter of an Indian family that was on the bus with us, then it was sitting next to her, then it was taking turns as the whole family posed for photos with him, one after another. Once they got off the bus, another family got on and the entire routine started over again. Given that he is stuck with his parents as sole company for the next six months, Oisin is seizing any chance he gets of playing with people his own age, and so he jumps straight in when the opportunity arises. This then leads to indecent levels of squealing and running around madly. All of which the Indians feign to find endlessly entertaining.

Their mode of physical appreciation of a “cute child” is cheek pinching. It is not so much a hard pinch as a gentle squeeze between thumb and first finger, but it can be anything from a passer-by’s hand trailing lazily across his cheek accompanied by an indulgent smile, to an energetic mother gripping both his cheeks, one in each hand, looking for all the world like she is going to lift him off the ground in her thrilled enthusiasm. We got off the HoHo bus to eat at a craft village in the south of Delhi, and by the time we got to the entrance, he was being mobbed. There was a crowd around him about 3 deep, with small girls elbowing their way to the front in order to get a handful of those cheeks.

Miraculously, he hasn’t tired of this yet, despite being photographed repeatedly. At times it seems that the likelihood of a photo opportunity is directly relative to the speed with which we walk – if we’re dawdling, there’s enough time for the adults to spot the child, overcome their awe, hit upon the idea of recording the encounter, and approach us with a smiling request. The idea of refusing always seems needlessly churlish, but we both wonder if there will come a moment when he will get fed up with it.

On the bus here he established playful relations with a boy in the seat in front. This child had a tic-tac box, but one with a whistle as part of the plastic lid. He shared a sweet with Oisin, and thus made an indelible impression on my son. When it later came our turn to provide him with his very own tic-tac box, the sweets became a distraction from the joy of his new whistle. The whistle has become the sound that accompanies us as we walk the streets of McLeod Ganj, where we arrived a few days ago. It is the small town above Dharamsala which is home to the Tibetan government in exile, along with the Dalai Lama. The town is populated with what seems to be an equal mix of backpackers, Buddhist monks, and stall-holders selling everything from prayer beads to Bob Marley wall hangings. The streets are so narrow that it defies belief that they manage to facilitate two-way traffic, but two-way it is, although it only seems to flow if there is a constant screech of horns. It’s as if the Buddhists have deliberately chosen the most unlikely place to seek nirvana – I can’t even get a night’s sleep for the constant racket from the street below.

Oisin’s response to the incessant din of car horns is to whistle back at them with his tic-tac box. He does this with great animation, leaning forward from the edge of the road and aiming his tic-tac right at the driver of the passing car. The two of us sat outside a cyber-café while Pati called home on the night of her birthday. The sound of the whistle drew the café owner out onto the pavement, and then the man from the shop next door, and then another neighbour who produced a packet of biscuits and insisted Oisin took several. The more he blew his whistle, the more adults seemed to appear and flock to him. They sat on the pavement outside the shop and played with his toy cars with him, they fed him, they feted his every word. I’m just worried the child will get used to this level of pubic adoration.

At first I thought the monks would be severe, austere, above the mindless blaring of horns in the tiny streets of this hill station. But even they have been seduced by the cheeks of my little boy. Their level of English is much less than the Indians, so we have had several mutually incomprehensible conversations which have revolved round pointing at the child and expressing awed delight. The most memorable encounter was a couple of days ago when we stepped out of the hostel onto the street. Oisin had dressed himself for the afternoon stroll, and we bumped straight into a Buddhist monk who began to make a signed fuss of him. Eventually it dawned on us that she was pointing at his feet, in what seemed like gales of friendly laughter. The child looked up, awaiting enlightenment. He had his sandals on the wrong way round.